The value chain of the food industry can be divided into three sections: 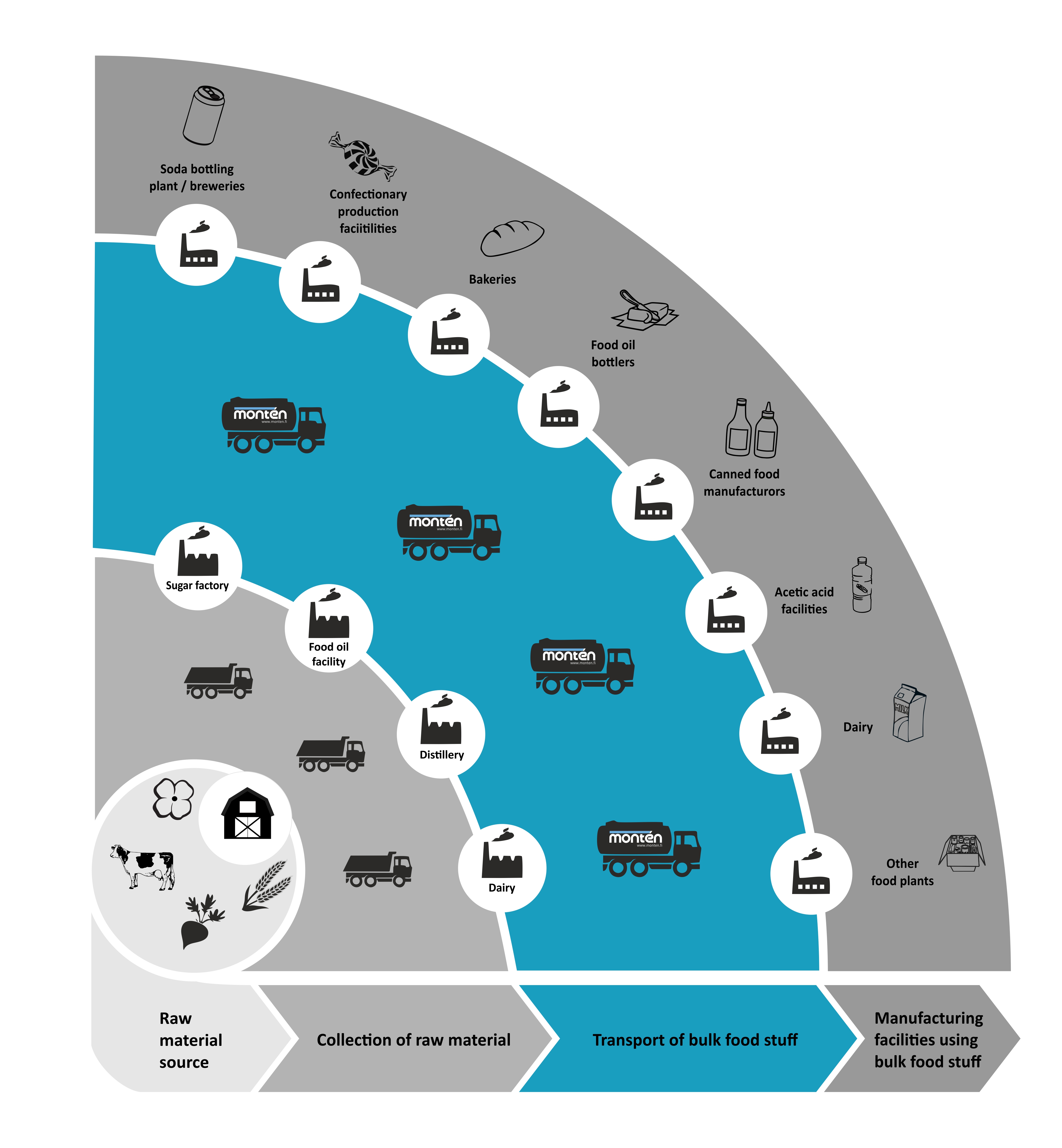 In the Regulation (EC) No 852/2004 regarding the food hygiene it is stated that the “The pursuit of a high level of protection of human life and health is one of the fundamental objectives of food law, as laid down in Regulation (EC) No 178/2002.”

The “Guidance document on the implementation of certain provisions of Regulation (EC) No 852/2004 on the hygiene of foodstuffs” dated 18th of June 2012 provides more specific information regarding the EU Regulation. With respect to the transport of bulk foodstuff, the Guidance document states that “In the case of transport of bulk foodstuffs (i.e. unwrapped or unpacked foodstuffs in direct contact with the contact surface of the food transportation unit and the atmosphere) in liquid, granulate or powder form, the Regulation requires food business operators to use dedicated transport means.”

“The background for this requirement is that there is substantial proof about the higher risk for these foods to be contaminated due to their nature, when transported in vehicles or containers that were used beforehand for other purposes. This remains true even after cleaning of these means.”

“Since the word “granulate” may mean “in granular form” or “in grains”, several requests have been made to clarify what is understood under that wording. In general terms, it would be logical to limit this requirement to foodstuffs that have been given a granular characteristic after processing (e.g. sugar) or grains that have been husked, washed or prepared and that are to be wrapped/packaged for sale to the final consumer. This should therefore exclude primary products such as grains, which have been harvested and need further preparation, with or without processing, before being intended for human consumption.”

Finnish legislation for food processing and transportation of foodstuff is based on EU regulations and supervised by Evira, Finnish Food Safety Authority

Finnish legislation for food hygiene 23/2006 is based on Regulation (EC) No 852/2004 and supervision is nationally the responsibility of Evira, Finnish Food Safety Authority. Under the national supervising body Evira, local health authorities are responsible for implementing legislation. Local health authorities validate food operators, which include food processing plants as well as transport companies, through regular audits. Montén operates under the jurisdiction of Espoon Seudun Ympäristöterveys (the Environmental and Health department of Espoo), which audits Montén on a biannual basis.

Self-surveillance for companies performing the transport of food products became mandatory in Finland in March 2001.The decision is based on EU directive 93/43 and Finnish Regulation 597/2000. Our self-surveillance system was originally approved by Kirkkonummi-Siuntio kuntayhtymän Public Health authority. The decision number is 10/01 and dated 23.02.2001. Supervision of Montén’s operations has since been transferred to Espoon Seudun Ympäristöterveys. The City of Espoo first decision is dated 10.6.2010. Operational changes are reported to the supervising health authorities and audited on a biannual basis.

The Finnish Food Safety Authority, Evira, has been consulted on the interpretation of food law regarding the use of transportation tanks for bulk transportation of powdered and liquid food products.

Specifically, Evira has been asked to confirm the interpretation that tanks intended for the transport of bulk foodstuff should not carry anything other than food products, and that this interpretation applies to all operators in the sector that transport food products in bulk in Finland.

**”Processing” means any action that substantially alters the initial product, including heating, smoking, curing, maturing, drying, marinating, extraction, extrusion or a combination of those processes). Source: REGULATION (EC) No 852/2004

*** “Final consumer” means the ultimate consumer of a foodstuff who will not use the food as part of any food business operation or activity. Source: REGULATION (EC) No 178/2002